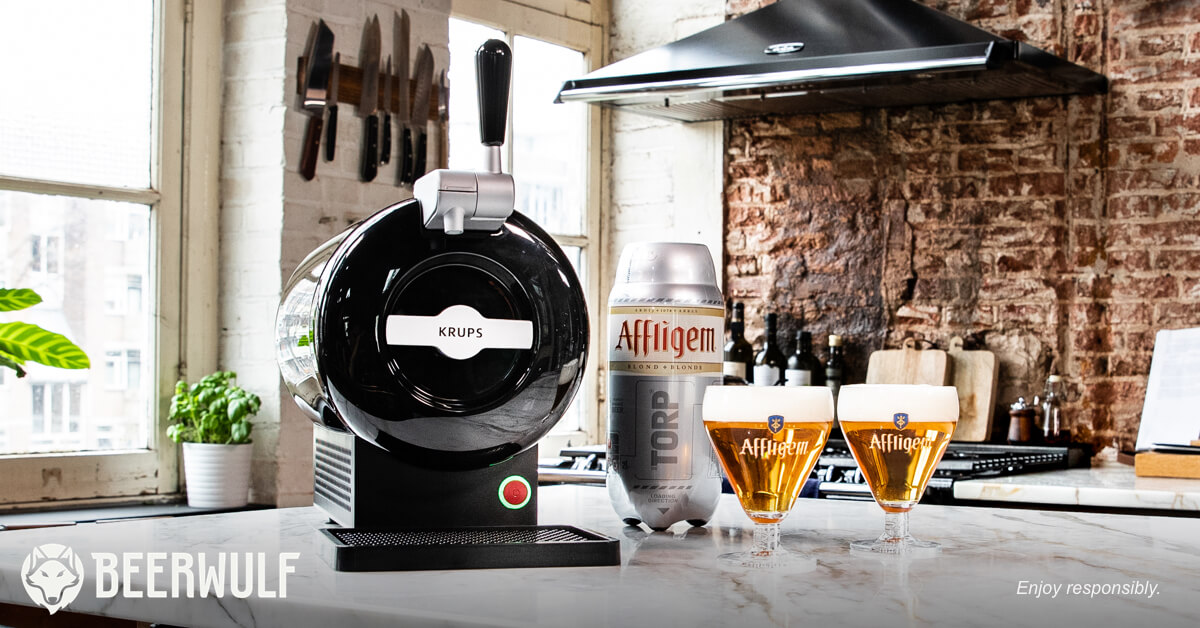 The home based draft beer system that makes beers taste as good as they do in the pub. Just don’t expect things to happen quickly as this service is seriously let down by the delivery company.

Beerwulf is the retail name for the original Heineken “The-Sub” and other devices but now it comes with a craft beer club and much more.

About two years ago, I noticed a good deal online for the Heineken Sub system. This is a home based draft beer dispenser that you can insert 2L kegs (known as torps) into of various flavours and then pour real draft beer from.

The Sub machine is made by Krups who of course make coffee machines and other high quality kitchen utilities. There are two main sizes as there is also the “Sub-Mini” which as the name suggests, is a slight smaller version. Each size also comes in various colours such as red, black, silver and of course there is the branded Heineken version too. The machine is basically a refrigerated unit with a built-in compressor. The idea is that you insert the torp kegs which have already been chilled in your normal fridge, then once inserted and switch on, the sub machine will slightly chill and keep at 2’C your selected flavour plus the on board compressor then pressurises the keg ready to dispense.

Now it should be noted, if you are expecting to receive your order of chosen drinks on the day you intend to party, you’re in for a shock. Once the kegs arrive you will need to place in your normal fridge for at least 12 hours. Then once a 2L keg is placed in the sub, it will chill for another 3 or 4 hours before the little LED on the front changes from red to green. So really you are looking at nearly 24 hours of prepping to have your drink ready. The good news is that once you have finished the initial 2L keg, placing a replacement into the sub only takes a few moments for the light to turn green. Assuming of course that the replacement has been in the normal fridge for at least 24 hours.

So now I’ve explained the basics of how the concept works, let me point out the positive and negative parts of not only the hardware/concept but the actual retailer too. The positive points are that the final product that comes out of the machine is draft beer, it is full of compressed air and every glass poured has a good head and well balanced body. There are plenty of choices of varieties available from well know brands such as Heineken to Birra Moretti. There are IPA’s, blondes, whites, ciders and some seriously strong Belgium beers. However, this system is not cheap with the cheapest 2L kegs being about £6.99, the average being £8.99 and some are as expensive as £18 for 2L’s. The other issue is, once a key is inserted into the sub machine, it can only be removed when it is empty. So if you want to have various brands available to you and your friends as the same time, you will need several sub machines online at the same time. Also, once a keg is inserted and primed, it will only last for two weeks before it is spoilt. Which when you think that is 4 x 500ml glasses, that really isn’t an issue.

So that is The Sub…. so what about the retailer….

Beerwulf as mentioned is the retailer for the above system and it should be noted, they are the only retailer for it. They also offer the bigger “Blade” system which has an 8L keg. Plus they also offer a bottle and can “craft” beer club where you can order and sample beers from all over the world. The website is fairly easy to use (although there are a few broken links in places) and ordering 8 x torps will give you free delivery on your order. My major issue so far with this retailer is the delivery. The website clearly states that the expected delivery from order is 3 to 4 days (although that is stated to be longer in the current Covid-19 crisis). This is however, utter crap… Even before this Crovid-19 stuff, I have ordered several times from Beerwulf and on each order, the quickest my order arrived was at least 16 days with the worst never turning up at all and had to be re-ordered (free of charge). To be honest, it is not so much the fault of Beerwuld, usually the order is processed and dispatched from them within a few days. The problem really lies with Yodel, this courier is shockingly bad and it usually takes them over 10 days to get 1 parcel from 1 end of the UK to the other. Then because you can only order from this company, you are stuffed…. there is no option to order from another retailer..

Quite a few times, I have planned to have a “tasting” evening with some friends and placed my order 2 weeks in advance of the planned evening and each time, I have had to postpone the evening as my order did not turn up on time (the 2nd event was the order that never turned up, by the time it was re-ordered it was nearly 32 days before I received my order).

So to summaries… the product is good albeit a little expensive. What comes out of the tap from the Sub is good quality beer. The choice of selection is good also but my problem is the quality of service that you will expect from the retailer or rather their courier. If you plan an evening with friends, or to get an order in for “the big match”, you will need to place your order weeks in advance to have any slightest chance of ensuring you have your product there in time. The other issue…. there is only the one choice of retailer….

To find out more: https://www.beerwulf.com/en-gb